Ch 1: Shooting Ourselves in the Foot

“the simplest way to explain the behavior of any bureaucratic organization is to assume that it is controlled by a cabal of its enemies.”

From time to time, it is necessary to turn our attention to the processes of our organizations for some reflection. The core purpose of most organizations is to provide value – in one way or another – to the ecosystem that they are a part of. For private corporations, this tends to be by bringing a product or service to market to be consumed by a customer. Public organizations provide services to their constituents, even artists seek to deliver value to their patrons or fans.

For all of these organizations, a common idiom is that value is co-created by the organization and the consumer at the point of delivery. For this reason, organizations have an incentive to continually maintain a dialogue with the consumers they wish to exchange value with.

This makes one of our fundamentals tasks within an organization is to consume information about the world, craft or re-factor our offering((In business, an “offering” is the actual product or service that you bring to market. If our “Value Proposition” is to “help you get home safely, our “Offering,” might be a car service)), present it to the world, and repeat the cycle. 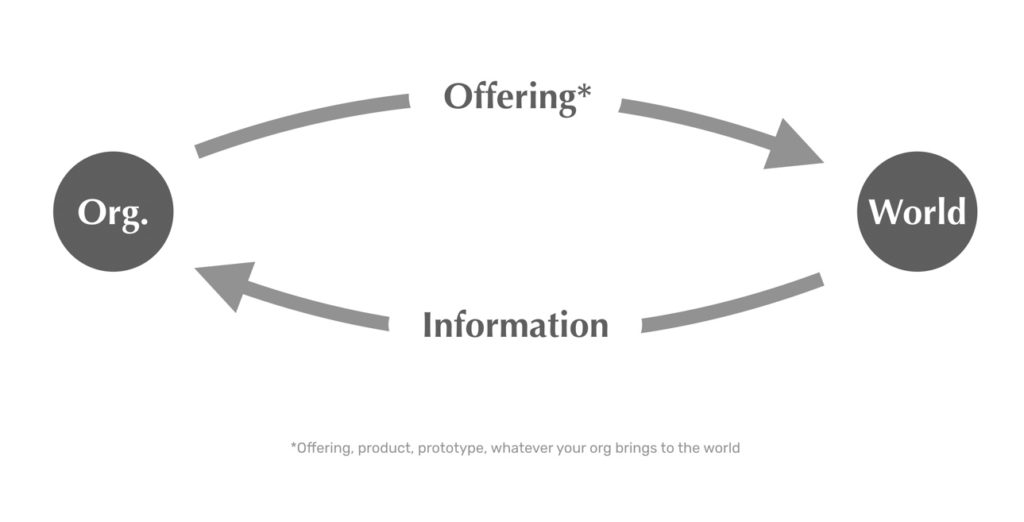 The world is big, dynamic, and complex – our organizations therefore need to be able to quickly, efficiently, and organically respond. If we desire for our organizations to remain resilient in a changing world, keeping this feedback loop healthy is critical. To the extent that we can do so, we can iterate quickly, but experience tells us that in large organizations, this can be tough. Why is that?

There are a lot of reasons, but for today, we’ll concentrate on the things that we can control within the organization. Traditional infrastructure and processes create eddies in this flow – little nooks and crannies where information collects, but does not easily pass from node to node in the overall system. 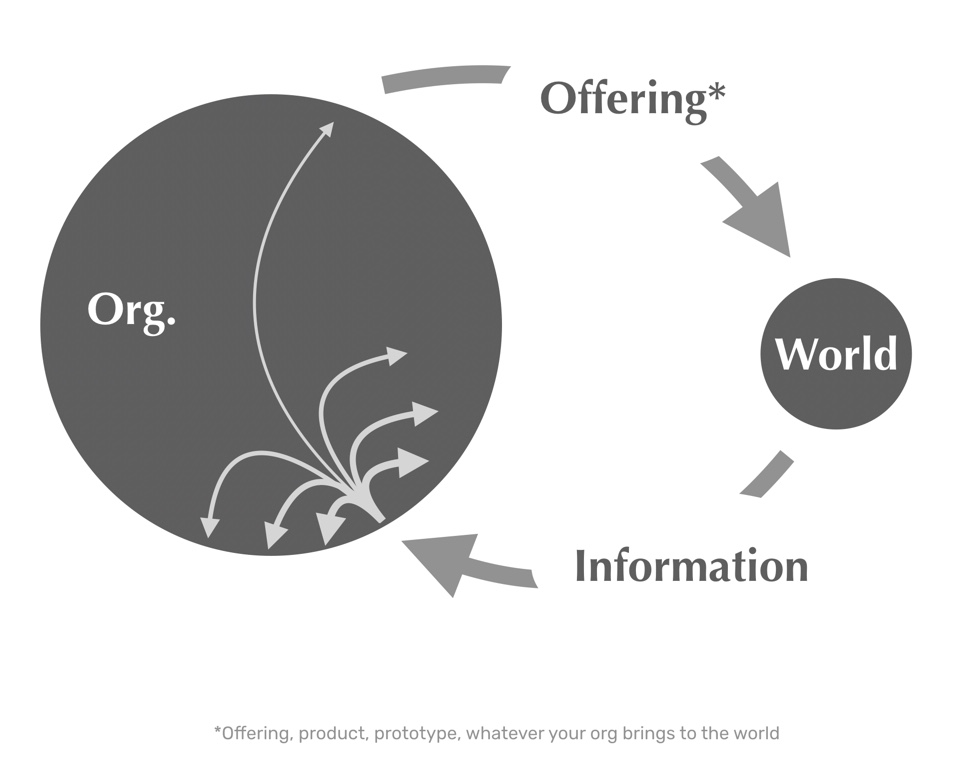 How do we create eddies?

Why does this happen? To frame this question, it helps to take a page from Robert Conquest who reminds us that “the simplest way to explain the behavior of any bureaucratic organization is to assume that it is controlled by a cabal of its enemies.” If we wanted to make a system fail, how would we accomplish this? Specifically, if we wanted to make an organization that was incapable of digesting and responding to information from the world, what sorts of measures would serve that end? How would we map and identify them?

The first step is to view the organization in the right way: as a system of interconnected nodes that carry out complex activities. By viewing an organization as a system, we can map the higher-order infrastructure and processes that tend to operate on their own without conscious agents trying to create them.

With this mapping, we can identify some specific ways this “cabal” attacks itself at critical points. Finally, we can turn to the devastating role that modern “design” practices tend to play within this system.

What is a System?

Wikipedia defines a “system” as “a group of interacting or interrelated entities that form a unified whole. A system is delineated by its spatial and temporal boundaries, surrounded and influenced by its environment, described by its structure and purpose and expressed in its functioning.”

Military strategist John A Warden adds another couple of useful descriptors about systems:

Most of us have a tacit understanding of what a system is, but those who study the dynamics of systems and methods of “systems thinking” point out that our day-to-day decision making and most pernicious habits and mental models tend to be rooted much more in “linear” thinking. Faced with the problem of information eddies, our first reactions as managers might be to locate the human individuals that have not appropriately shared information and demand greater accountability.

While this might feel productive in the moment, Peter Senge, author of The Fifth Discipline and director of the Systems Thinking and Organizational Learning Program at MIT’s Sloan School of Management points out that it is unlikely an effective way to change behavior within a system. These “event explanations” are key behaviors of “reactive management” styles and make the mistake of expending effort on low-leverage parts of the system. Rather than focus on “event explanations,” Singe points to higher-leverage “structural explanations which focus

Systems thinking encourages us to think about networks of nodes that are stitched together though interactions, processes, infrastructure, and shared visions and mental models. When we confront the notion that ‘When placed in the same system, people, however different, tend to produce similar results,’ we’re forced toward the realization that the structure, not the individuals is where the real leverage lies in a system.

With this understanding, we shift back to Conquest’s Cabal – knowing where the leverage is, how would we destroy a system? If we take a page from modern military strategy, we would focus on two objectives:

As the leader of a cabal to destroy my organization, I would focus on two objectives:

1. Neutralize Centers of Gravity:
Allocate scarce resources and efforts to low-leverage, non-critical nodes in the system.

Let’s explore these each in turn to see how their effects specifically would create a stunning drag on the overarching system.

If our task is to manage the flow of anything through a system (power, resources, or in this case, information) there is a lot to learn from those who study and try to enact change on systems. Military strategist John Warden has written about how to paralyze a system. Systems – efficient or otherwise – tend to be resilient over time – as Senge would note, “when you push on a system, the system pushes back.” The only way to change them, Warden notes, is to “shock” them with a parallel attack on multiple critical points, what Warden calls “centers of gravity.” 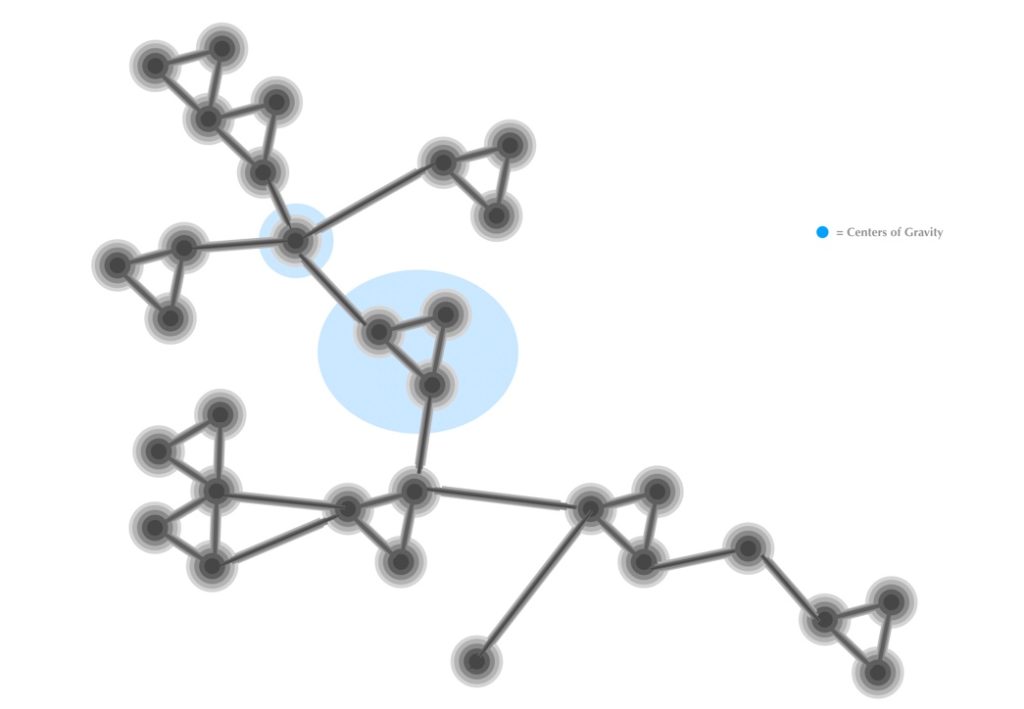 A Center of Gravity is “a leverage points in the system—where the resources used would have the greatest impact.”((Warden)). The emergence of these critical points is not based on a weakness of strategies of the system  – all systems consist of critical nodes that tie the structure together. These points have the most leverage and are the keys to strengthening – or destroying – a system.

Attributes of a Critical Point 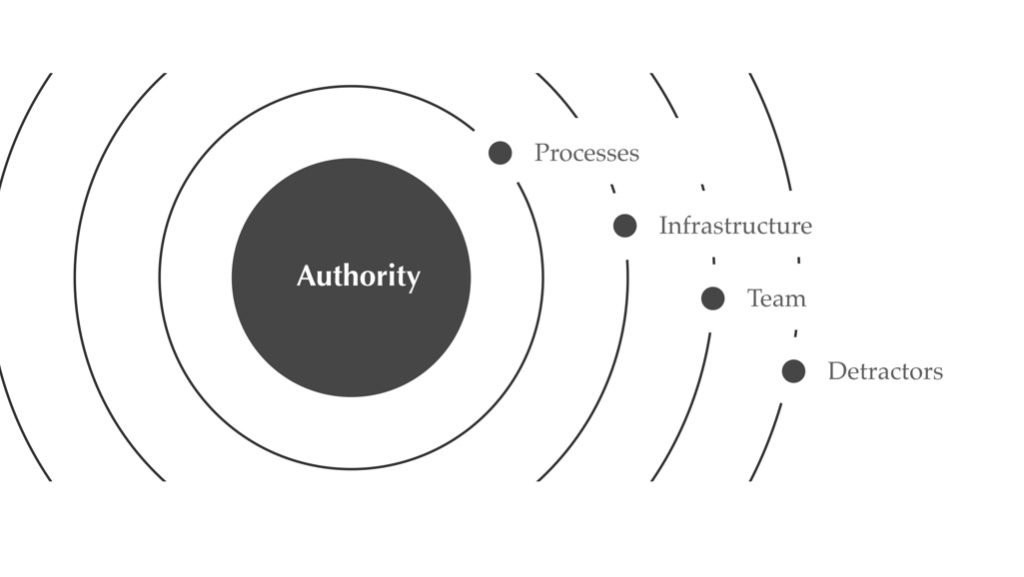 Each node in the system can be understood as containing five “rings,” with the center ring holding the most leverage, and each subsequent ring holding less leverage. In a business, for example, the procurement department is the center of gravity when it comes to managing our infrastructure. The Procurement Department, itself, has Leaders, Processes, Infrastructure, Population, and Agents((Agents are entities in a system that protect it in various ways)).

What is an Eddy?

With this, we can sharpen our definition of an information eddy: Eddies occur when information is kept in a way that if is difficult to share between nodes. This may occur if information is:

Eddies can occur everywhere, but they are the most destructive when they occur at the Centers of Gravity in a system.

Both of these reduce the possibility of the information having an effect on the system. Ironically, they also make the information less resilient (storing information in your population, for example, means it will all walk out the door when a couple of employees quit.)

If we are trying to strengthen or change a system, we know that we’re in danger if we ever see ourselves putting efforts on the wrong elements first.

The two easiest ways to waste effort when maintaining a system are:

For instance, We should never let infrastructure drive process – it concentrates effort on a point with less leverage. we already know that we’re on the wrong track. Even worse if we let populations or agents drive our process.

Design is an Eddy

“Design,” as a process, is the most pernicious information eddy, at least in its modern manifestation. By changing “design” from fundamentally a process to a population, we have created multiple critical weaknesses in the system by both demoting the practice to an outer ring and by storing these competencies in local, rather than central, nodes.

Design’s approach to leadership, processes, infrastructure, populations, and agents are all separated from the organization by barriers we have, ourselves, created. This created information eddies that bleed the system of its ability to respond.

Organizations don’t need to worry, however. Lean startup practices and agile software development are going to kill it.

Interestingly, proponents of the current era of design specifically want not to make an eddy of design – before we look to the future, it may be helpful to think a bit about how we got here. What does it mean to “change design from a process to a population,” and how did it happen?