Americans get a special treat in Cuba that the rest of the world doesn’t get to enjoy: for us – at least, at the time of this writing – it is a forbidden land.

It is a constructed limbo for us. Can we go in? In the gray area built of myths perpetuated by both sides an answer is left unspoken – in the void a simple nod and a wink. 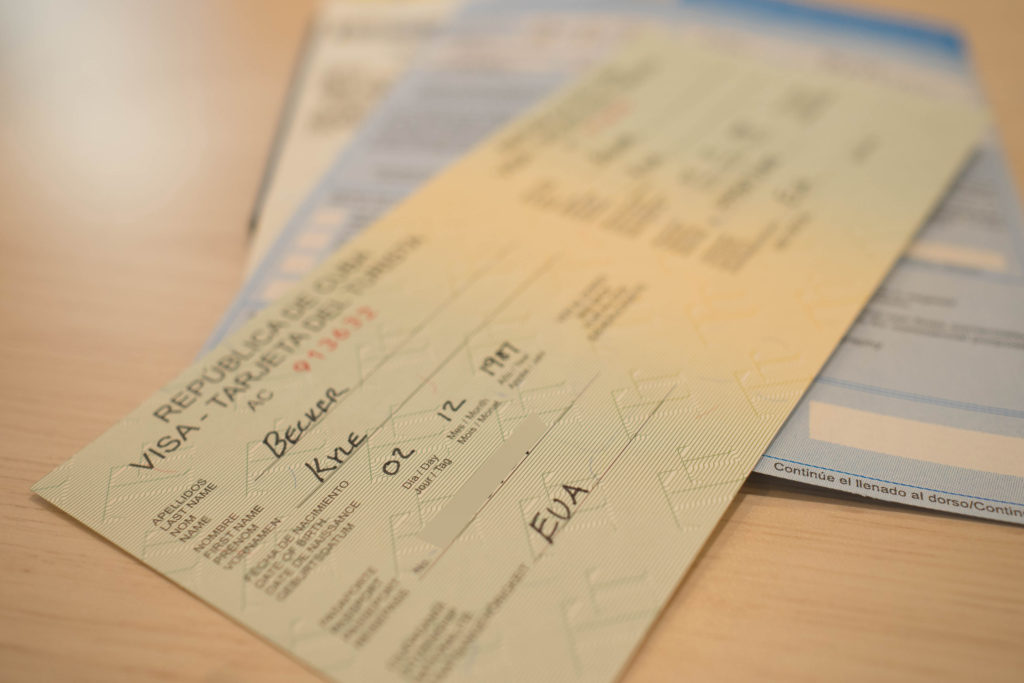 The worst kept secret for Americans is that you can get to Cuba through Mexico without any trouble. The Cubans know not to stamp American passports, so handing them an exit visa at on the way out erases all official record of your trip.

The Cuban myth is one of revolution – the proletariat, after rising up against the capitalistic dictatorship, took it’s position of power in the name of the people. The most famous icon – not the Cuban, but the Argentinian Che Guevara – would become a symbol not only of Cuban independence, but the international struggle for the people.

The US myth also shoulders the fate of the world. Cuba may not have been the most significant power to fall to the disease of communism, but it was the closest to home. The last we heard from Cuba was the Bay of Pigs escapade where Kennedy almost tripped and fell into an international nuclear war with the Russians – one that would have pulled all of us down with him. Afterwards, we heroically cut off all ties from the Cubans – their commie tyrants an assault to the passions of anyone with a drop of concern for human rights and civil liberties beating in their veins.

*I say “us” as if I would have ever existed in that parallel universe. 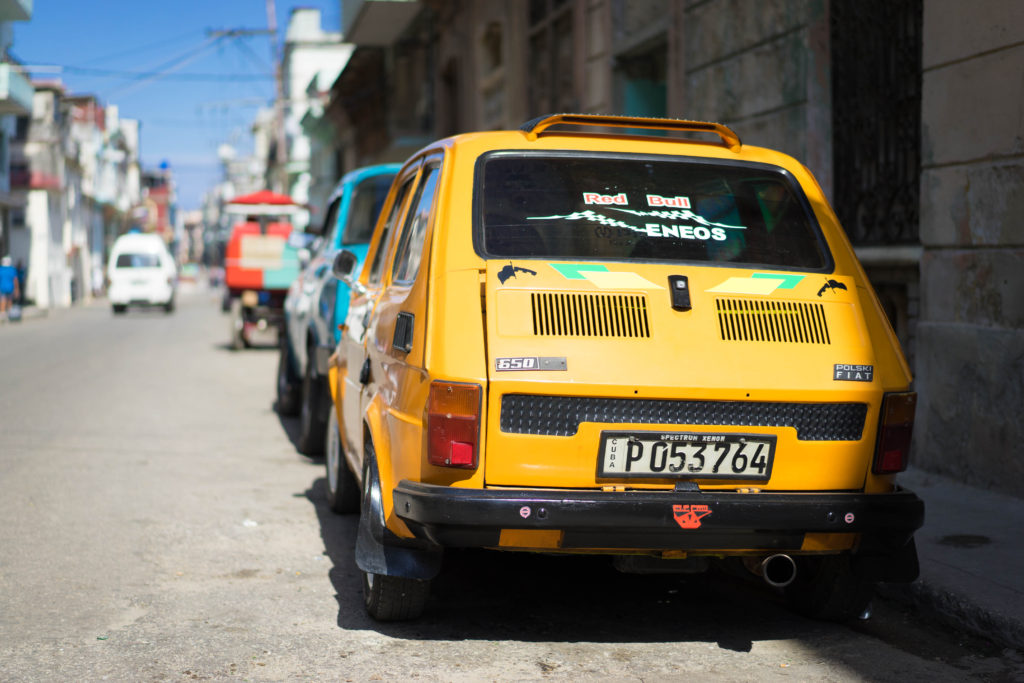 Of course, as we grow up, we learn that narratives as heroic as these have been masterfully crafted. They are as beautiful as they are simplistic – and nothing in the real world offers such clarity. 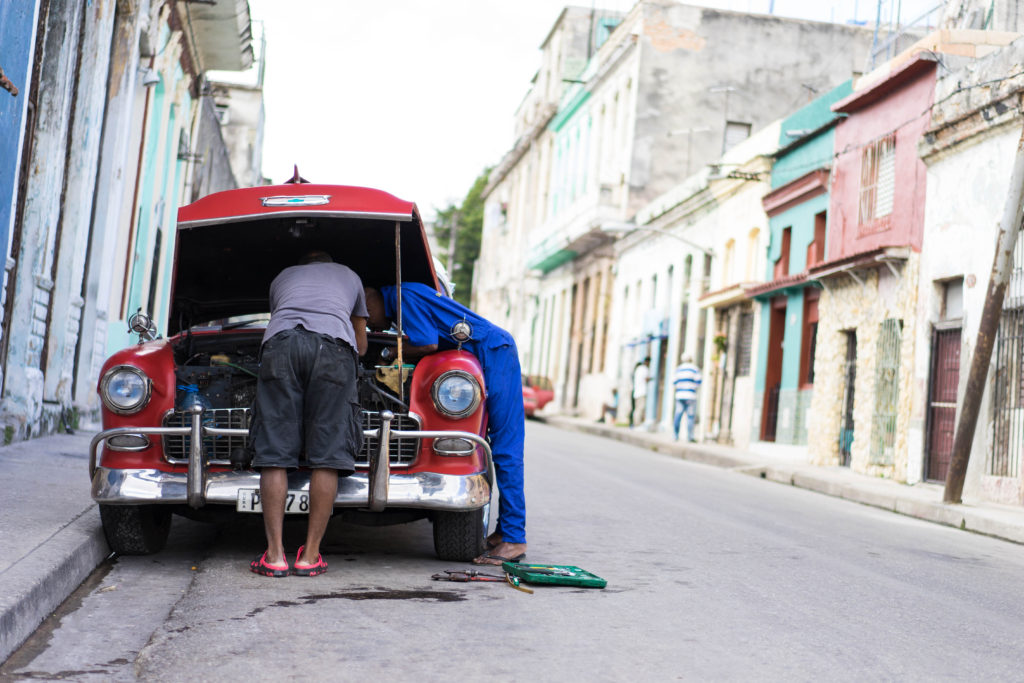 Eventually, they noticed me taking the picture. 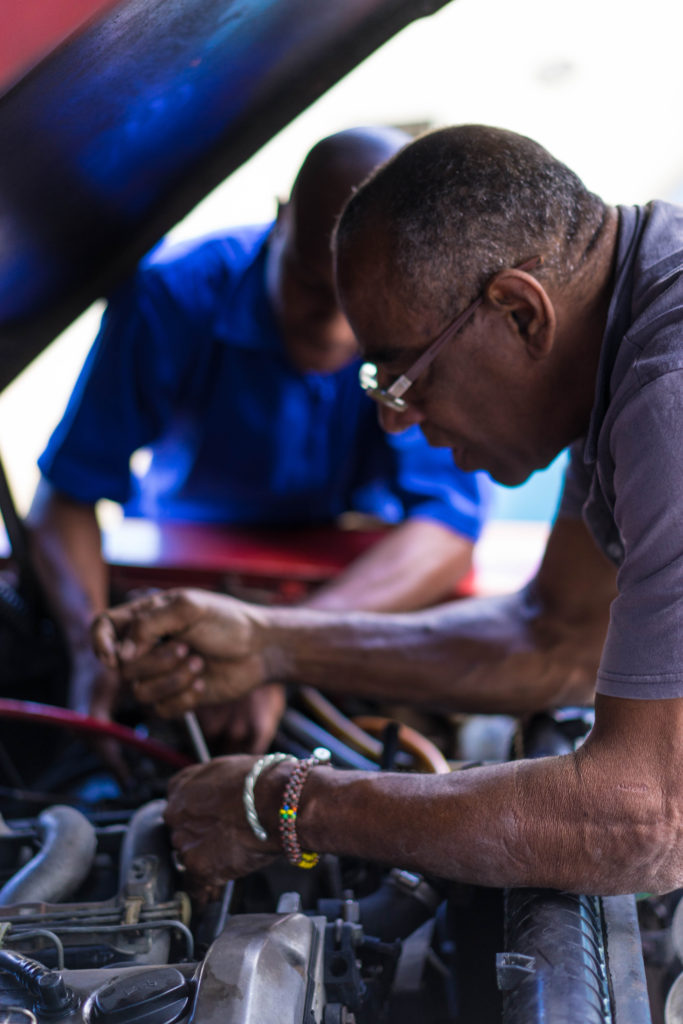 Of course, this engine looked like no ’55 Chevy engine I’ve ever seen…. 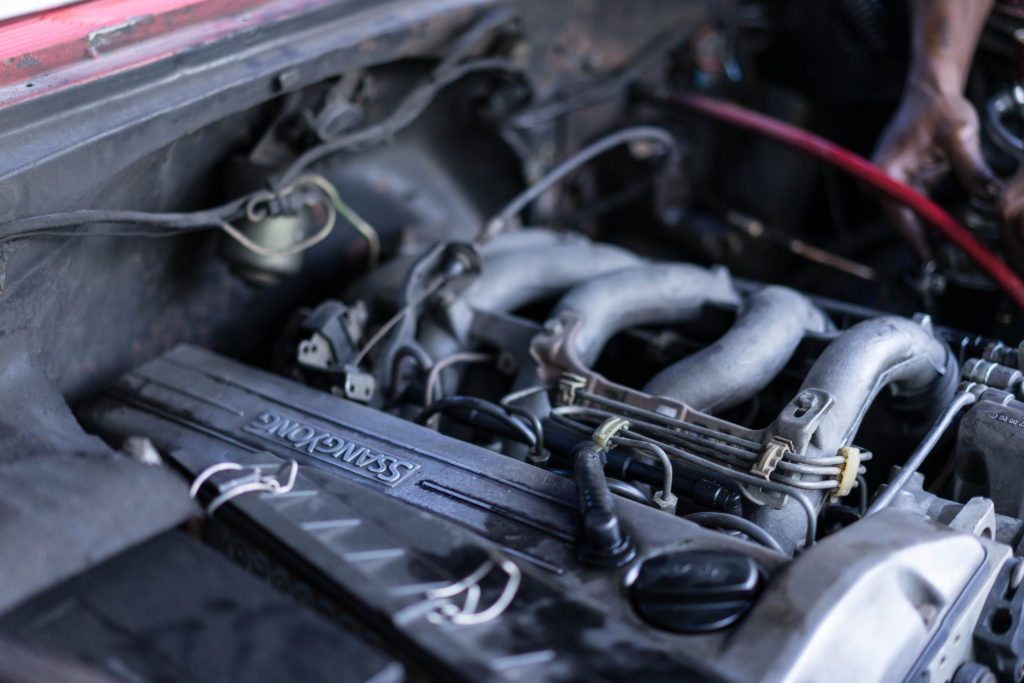 The US myth peters off… The Bay of Pigs fiasco was over a half century ago.

While the Cubans trace a thread of American transgressions over the years, the honest truth is that few people in the United States are really concerned with Cuba at all. Since the fall of the USSR, the tiny little banana republic poses no credible military threat to a nation like the United States, and as a trading partner it has very little to offer.* When talking to adults in the US about the country, they seem to not really know anything about the country past the 60’s – it is as if our notion of Cuba has been frozen in time, a living history of a cold-war era long past.

*Though I imagine happy our tobacco,rum, sugar, and tourism industries are probably quite happy to be shielded from one more competitor. 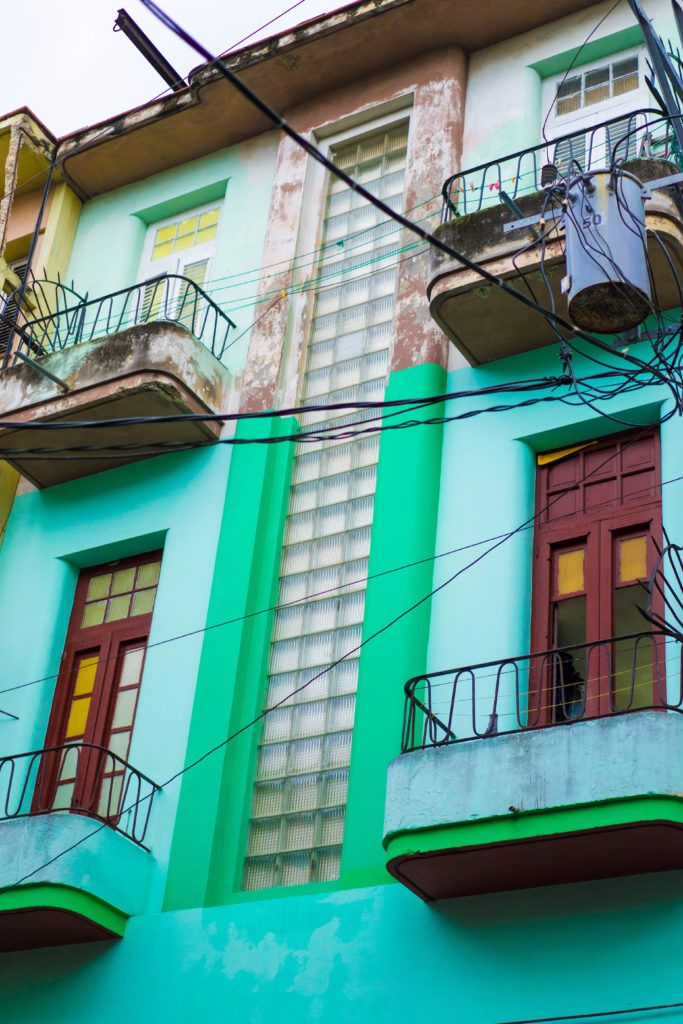 We know which neighbors decided to splurge on a bit of paint this year.

I don’t personally know any Cuban Americans, so I have nothing but the vague ruminations of a disinterested older generation to form my own judgments  The truth is that I, too, have always been disinterested.

Mexicans, of course, don’t feel this way about Cuba.

Before heading off, a friend warned me about the Cuba test at work. Similar to the hit by a bus test we use in the States, his boss reminds sometimes asks of critical employees – if so-and-so went to Havana, fell in love, and never came home, would we still be able to operate? 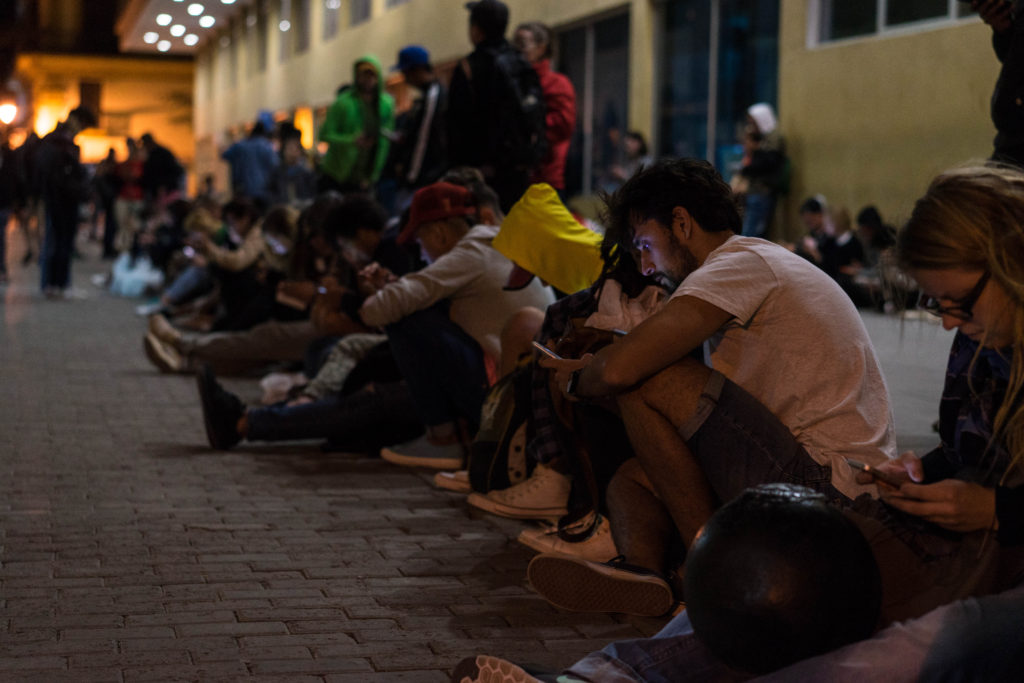 Wifi is only available in public areas. To use it, you have to buy a wifi card at a designated convenience store (or from a guy on the street). $10usd will buy almost an hour of super-slow surfing.

For Mexicans, it is not a forbidden land – Mexico and Cuba actually share a number of heroes in leftist political history and it was actually in Mexico where Guevara met the Castros before the faithful yacht journey back to really kick off the revolution.* 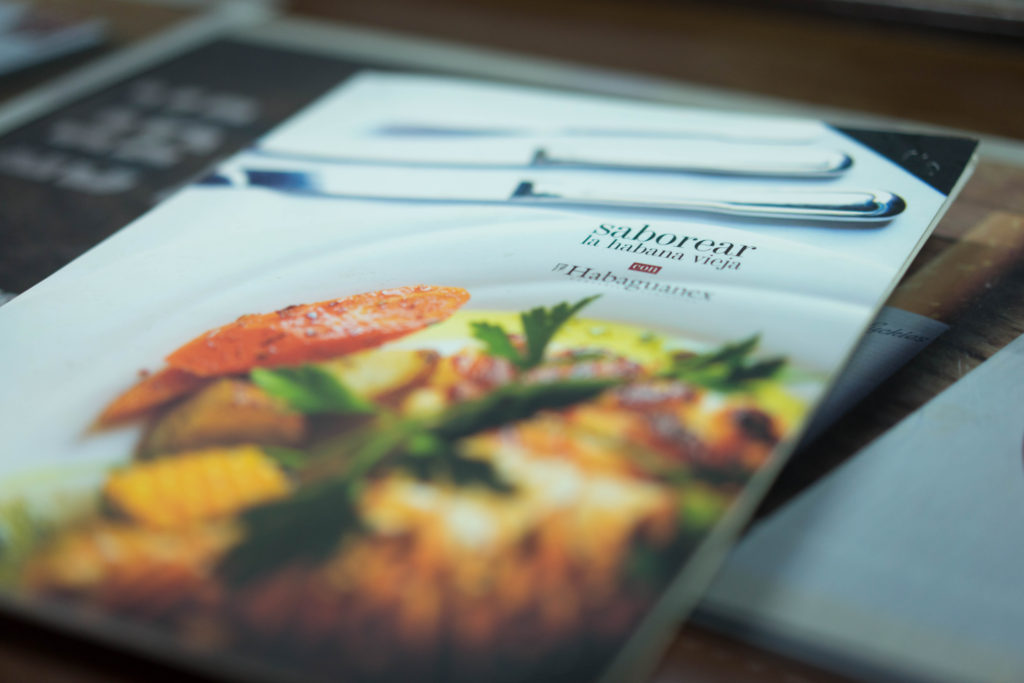 Based on the photo on the menu’s cover, we thought we’d finally found some good food in Cuba… 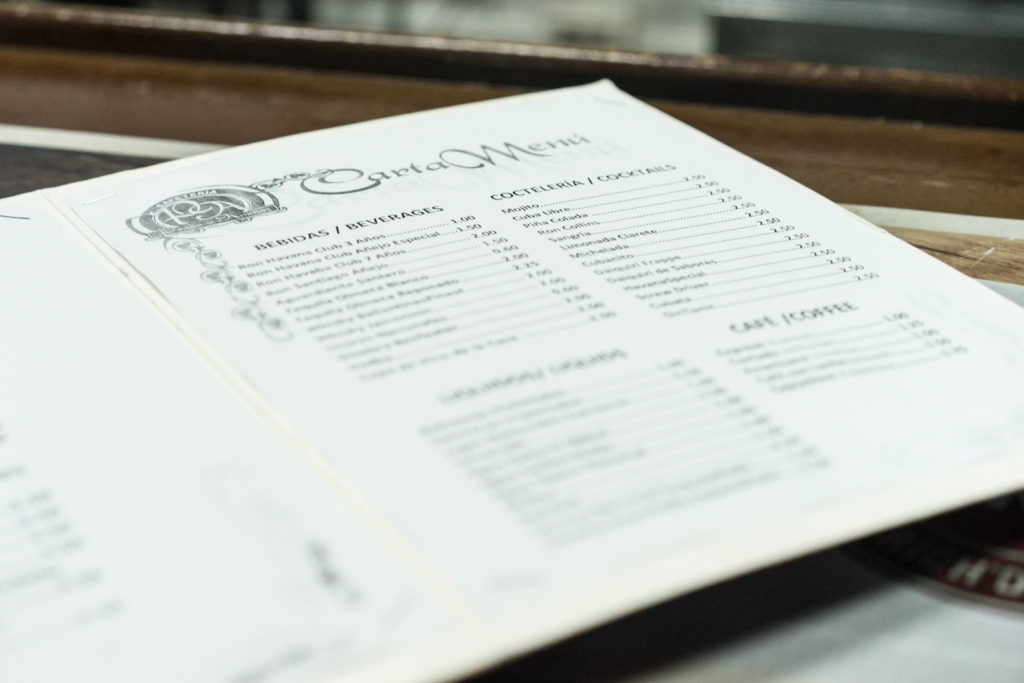 …until we opened it to two sheets of printer paper stapled inside. Pizza – like every other restaurant in Cuba 😀

My (Mexican) girlfriend’s grandfather is a proud communist that loves Cuba. The first time I met him he bragged about having shaken hands with Fidel Castro. Unfortunately, my Spanish isn’t good enough yet – there are hours of interesting conversation waiting for me there if I just had the ability to unlock it.

Latin Americans in general seem more aware of each other’s histories than Anglo Americans seem acquainted with the broader anglo-sphere, but that may be a topic for another time. 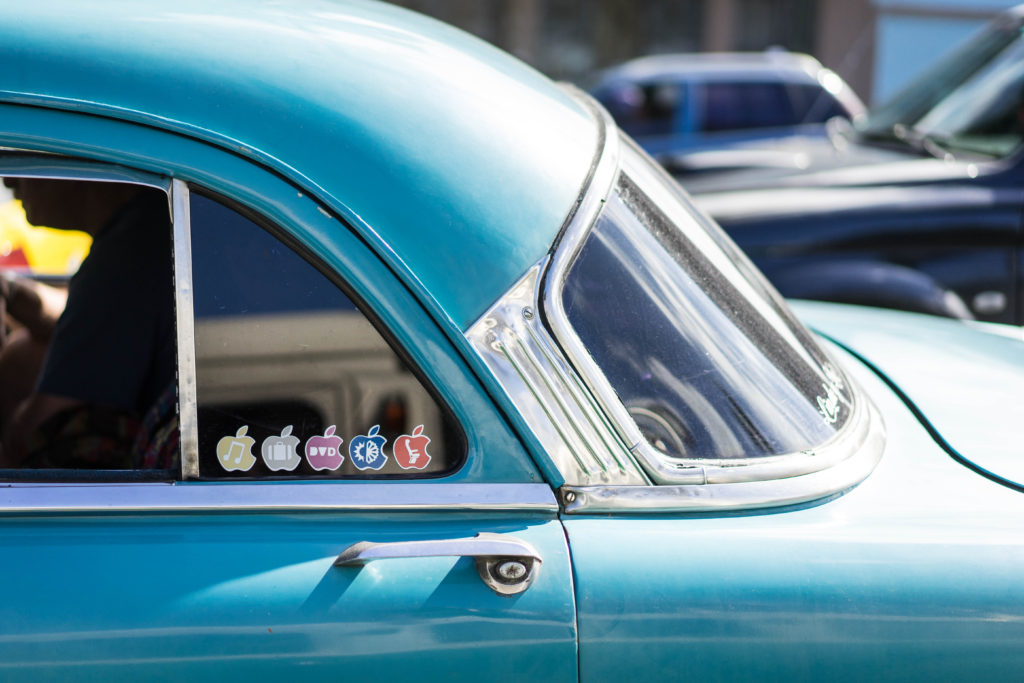 We never quite figured out the significance of these stickers, but they were quite common.

It is a beautiful country to be certain. Beautiful people. Beautiful landscape. Even the aging buildings crumble with an unmatched photogeneity. Whether or not its simplicity is genuine, the country’s surface-level aesthetic almost left me failing the Cuba Test. 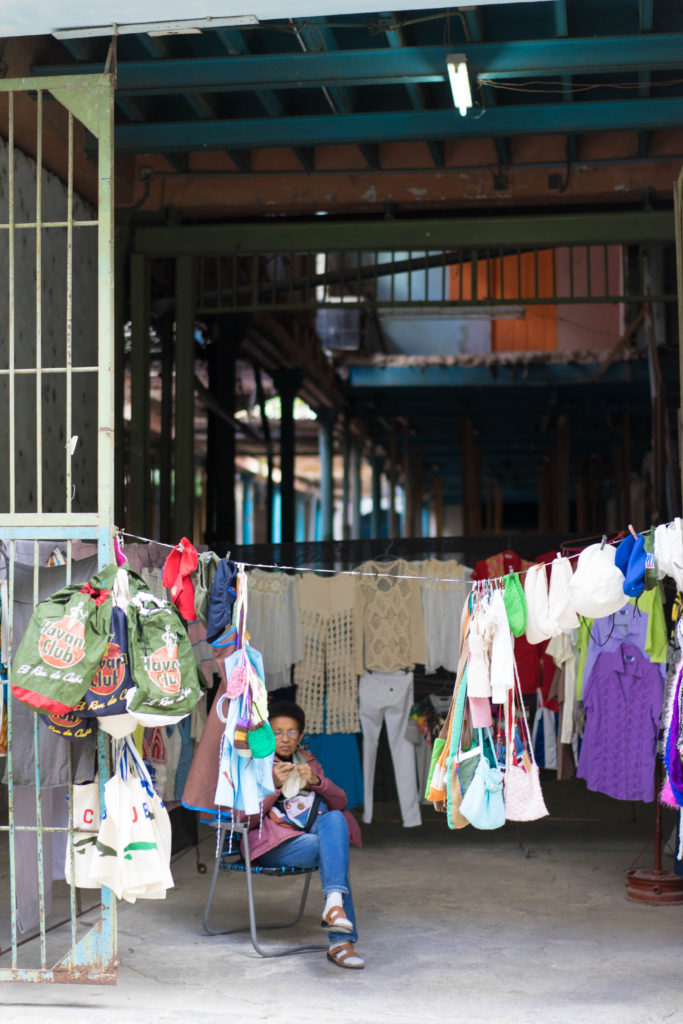 The facades of most of Old Havana’s buildings are still standing. 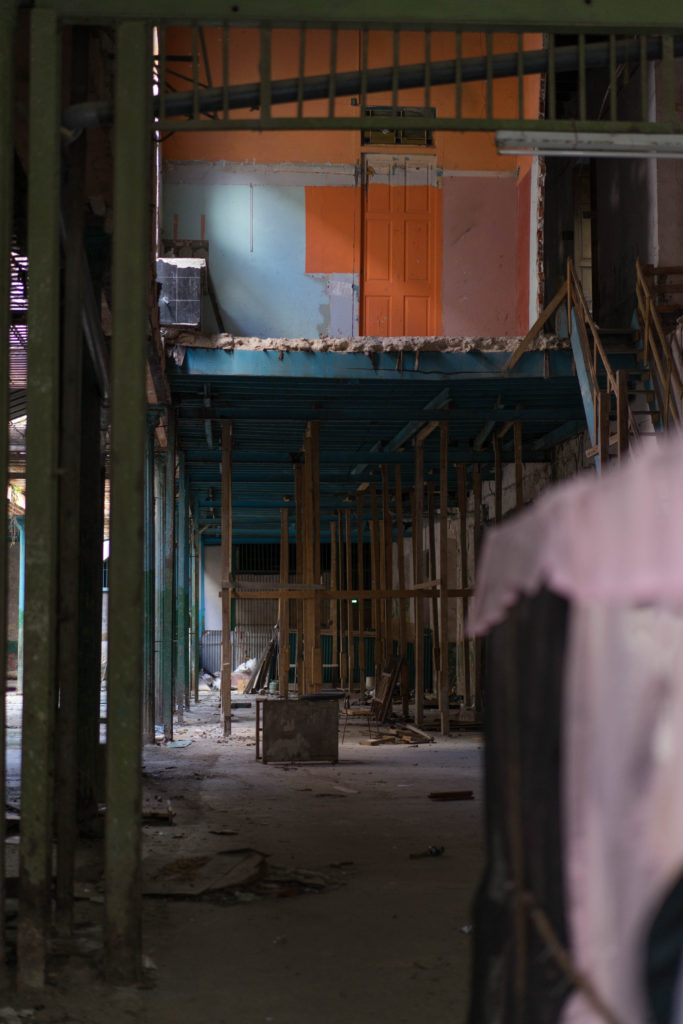 If, however, Cuba is soaked in mystery outside it’s borders, it is no less opaque within them. The more we wandered around in out short visit, the more we came to terms with the fact that we understood nothing about it. 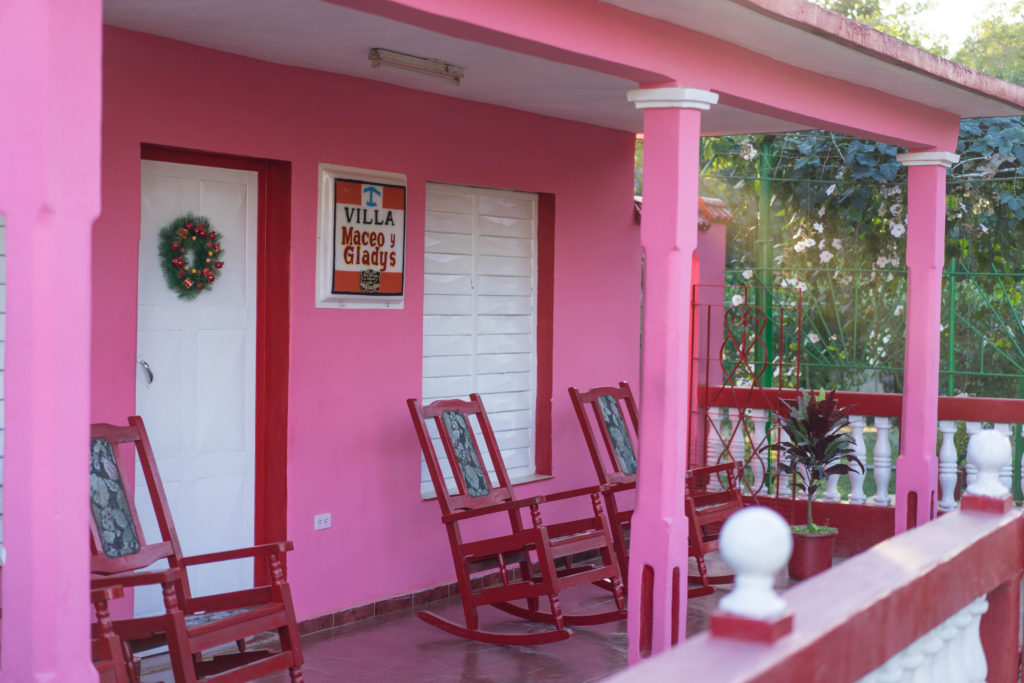 The tourism money pouring into the quaint village of Viñales is displayed in a fresh coat of point on every house.

Do people own their cars? We heard that they don’t own their apartments, so why are there so many ‘for sale’ signs on them? Why does the entire town of Viñales have only one listing on hotstelworld when over half the town’s houses are registered to rent rooms to tourists? In a country where an hour of wifi costs about $8usd in the designated public wifi zones, why did our taxi driver get a college degree in infomatics and webdesign? Why does the food here suck?

How can an entire bottle of rum only cost $3usd? Why am I allowed to sit on a wall in the country’s most populous city gazing at the ocean drinking it until the early hours of the morning, then wander home without the slightest concern for my personal safety? 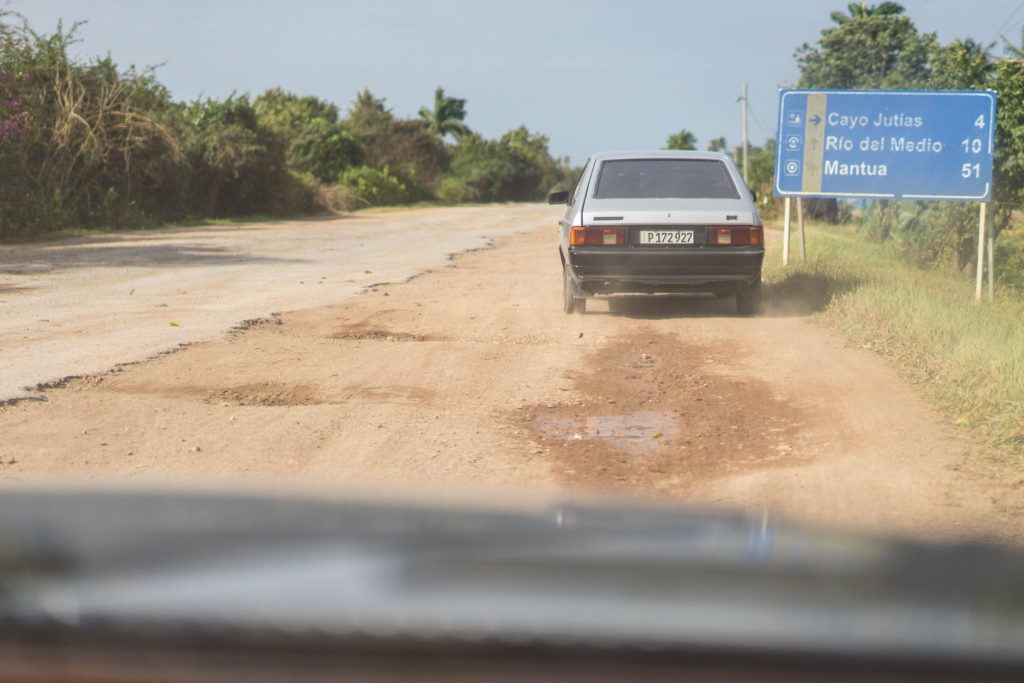 Outside of Viñales, Cuba, our Taxi driver and his friend avoid the pothole-maimed paved road for the smoother dirt road worn beside it.

The more we ask, the more we realize how much remains unanswered. It isn’t that these answers are impossible to find – just that it took a little while for us to realize we needed to ask them.

I’ve heard both from those that have visited the country and those that long to do so that once it is “opened up” – meaning “opened up to the United States” that it’s character will change. 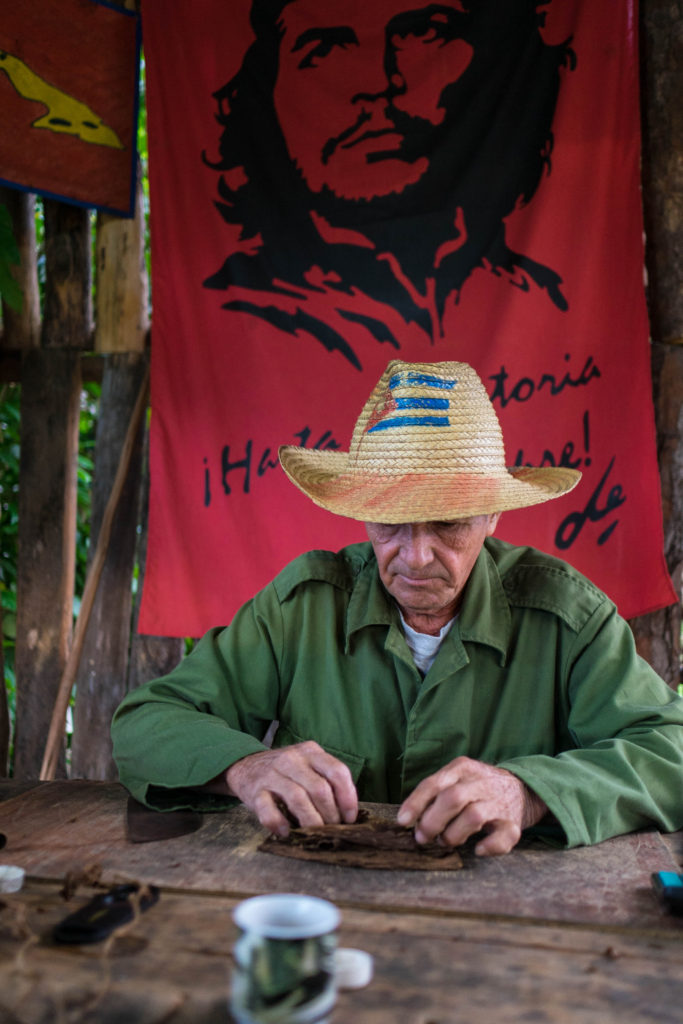 A patriotically dressed tobacco farmer hand-rolls a cigar for us. Farmers must sell 90% of their crop to the government at a very low price, but get to keep the best quality 10% for themselves, to share with family and friends, or sell to tourists. His pitch, of course, came soon after his demonstration.

The fear is that this magical little time capsule will close up forever. That it is a quaint, and slightly patronizing, idea does nothing to sooth the sadness in their eyes and in their hearts.

I’m not sure that this is necessarily the case. It is only the Americans that have an embargo against the Cubans – Canadians, Europeans, Austrailians, Latin Americans, and the rest of the world passes and interacts freely. It seems to me that it is communism – not the embargo – that has maintained the country’s aesthetic. No matter who the trading partner, it is the Cuban government that sets the rules of commerce within it’s borders. 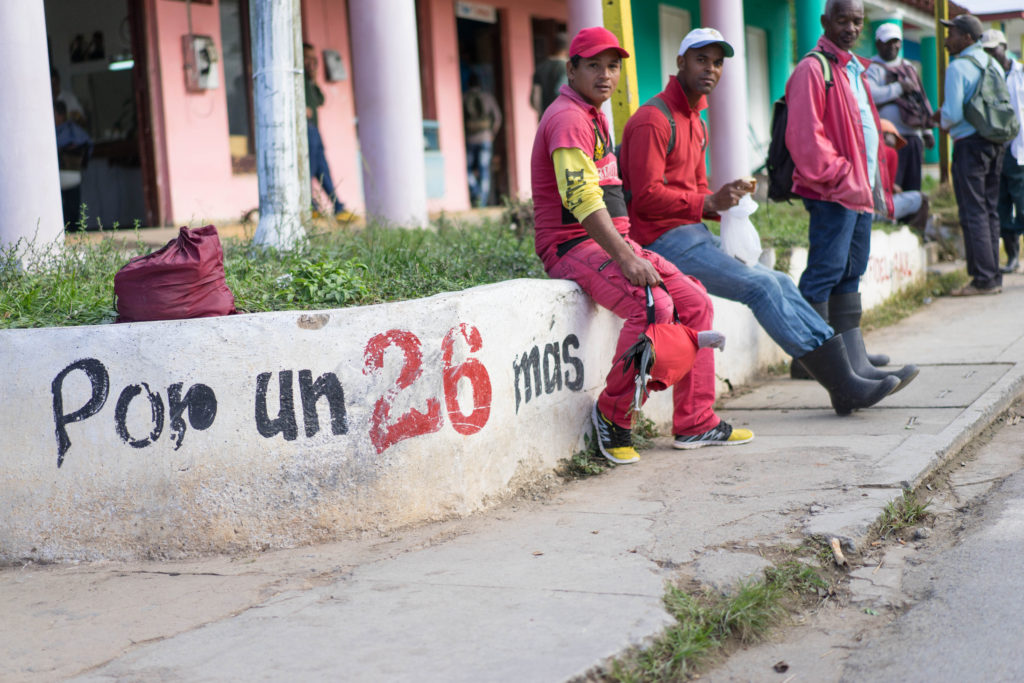 A man waits for a bus with his chicken. The “26” alludes to the July 26 Movement – named after a failed attempt at revolution led by Fidel Castro in 1953. He would later return to Cuba to launch a successful campaign in 1956.

…but time will tell.

Beauty is a strange thing. Many spend their entire lives trying to wrap words around a concept that we all feel instantly.

Cuba – for reasons equally difficult to fully understand – is a beautiful country. It is enough to wet the appetite of curiosity. Enough to make this uninterested Anglo interested. 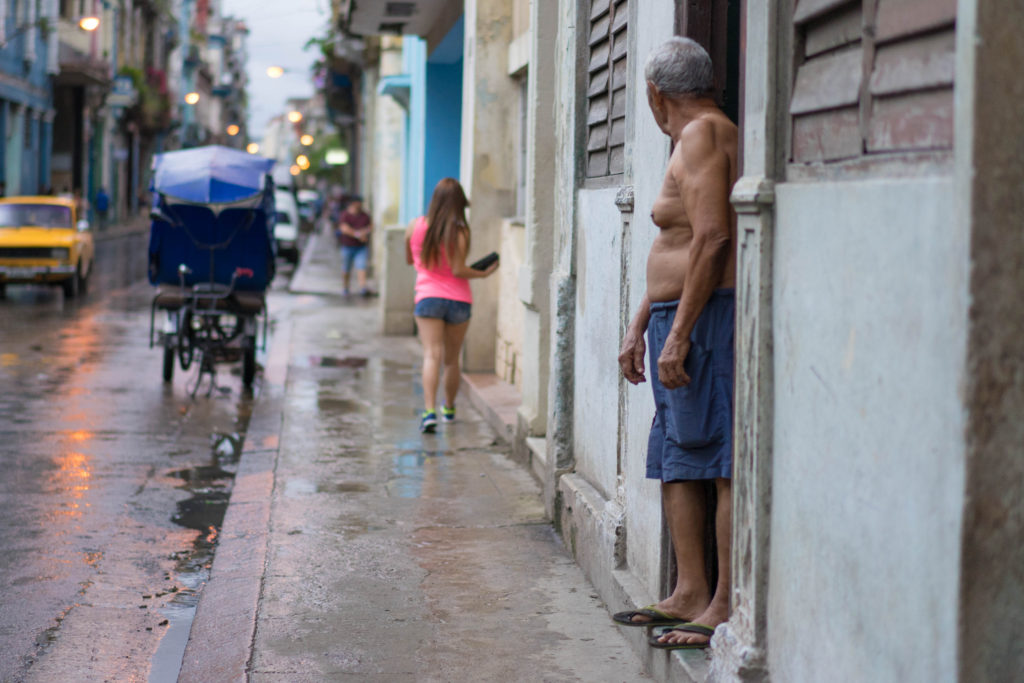